In his 2004 book, The Paradox of Choice: Why More Is Less, American psychologist Barry Schwartz makes a link between excessive choice and increasing anxiety in consumer-driven societies. In short, his thesis can be summarised as:

"The fact that some choice is good doesn't necessarily mean that more choice is better.”

Schwartz's findings received a mixed reception: formal studies seeking to confirm the link between choice and anxiety have found it difficult to do so. But there's no doubt the message found a receptive audience, and today the question is again being raised: in a competitive market, rather than ensuring a high degree of competition, can too much choice lead to inactivity among consumers?

Does choice really lead to inertia?

Certainly this view is shared by some within the UK energy sector. Greg Jackson, Founder of Octopus Energy, recently told the Financial Times that "one of the issues with energy is there are so many options that people have a look at it and just back away — it’s too confusing.”

Consumers apparently agree, and in a recent survey by Statista (see chart) 31% said that having too many tariffs to choose from makes it difficult to compare them. Thirty-six per cent also said the tariff information provided by suppliers is too complicated, strongly suggesting that UK tariffs have become confusing. As a result, 70% of the Big Six energy suppliers' customers remain on the Standard Variable Tariff, at considerable extra cost to themselves. In fact, on average, consumers who don't engage with the energy markets are spending £154 per annum more than they have too. 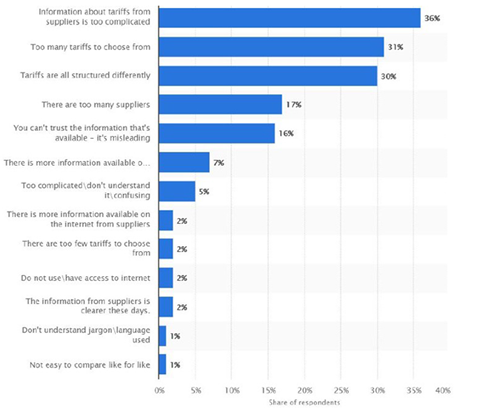 Whilst excessive choice is one factor, it is too simplistic to see it as the only factor. Following the introduction of a cap on the maximum number of tariffs that any one supplier could offer in 2010, there has been no discernible increase in the number of customers switching suppliers. The truth is that after 2008, the number of people switching tariffs began to fall, and actually fell below 2003 levels.

A report by the UK's Competition and Markets Authority (CMA) points out that from a demographic perspective, the people least likely to switch tariff or supplier are those on lower incomes, suggesting a lower level of education leads to a higher likelihood of disengaging from a market they find confusing. However, inertia is found across all demographic classifications, suggesting a wider range of reasons for the failure to switch to more advantageous tariffs and suppliers.

The need for engagement

At its heart, competition in the energy sector suffers from a lack of engagement. It's notable that in 2012/13 there was something of an increase in supplier switching recorded by the UK Government at a time when energy tariffs were the subject of news headlines and political debate.

In an article for the Independent last year, Peter Earl of comparethemarket.com, pointed out that people need to be regularly reminded and informed that they can pay less for their electricity, which is an issue for the never-ending Standard Variable Tariffs, where customers are rarely reminded that they can switch.

In October, Ofgem released a report on the price differences between the standard variable tariffs and the cheapest available rates of the top ten energy suppliers. Similarly, a report released at the end of 2017, concluded certain suppliers need to do more to 'get all customers a better deal' within the UK.

The simple act of reminding people that they can change tariff is easily done, and can become a feature of the bills sent to customers. Even in single-supplier jurisdictions, there is enormous benefit in helping customers engage with the range of options available to them, and simple messages on bills can play an important role alongside other communications initiatives.

Jendev's billing solution is designed to make a range of customer communications easy. After all, it really isn't the number of choices that matters: it's the way they're communicated that might make all the difference.

​Why is MS Dynamics NAV ideal for utility billing?

Microsoft Dynamics NAV is one of the most popular ERP systems in the world. What is it that makes NAV such a popular choice for companies?

Engaging Customers with Bills and Statements

Every statement you send to the customer is an opportunity to engage and educate them with tailored information about your products and services.

A significant number of customers do not look at their energy bill. We explore some reasons why this might be the case.

Smart technology will soon change the relationship between customers and utilities for ever. A bold statement you may think...